Recently I came across this fascinating version of chess(passed on to me by my friend Karthikeyan). I didn’t have an opportunity to play it. You need a different chess board to play it, but the concept itself is beautiful!3-way chess is a chessboard on which three people can play. The same rules apply except for some slight variation on moves made through the center of the board. 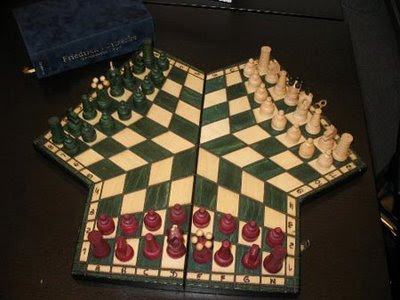 The regular chess rules are used, although the shape of the board is obviously different.

1. The players take turns clockwise. The right of the first move is determined randomly.
2. The player who makes first check-mate wins.
3. The pawns move straight forward. Accordingly half of the pawns goes to the right, and the other half goes to the left.
The main characteristic of the game: if two players don’t like the third, he is doomed.
The funny part of the game: the two players must compete for the privilege to check-mate the third.
I still prefer the 2 player chess which I am familiar with!
By topfomuser